Along the Salaria Road: Paggese, the village of the ancient inscriptions

MEETING POINT: To be defiined

Paggese is a village in travertine stone, located on a hill. It is surrounded by a suggestive landscape characterized by Laga Mountains and quarries for the extraction of the travertine stone still today.

The stroll starts with the visit of the Church of S. Lorenzo which conserves an incomplete polittico dating from 1400 by Pietro Alemanno, disciple of the great painter Carlo Crivelli. In this painting the client of the polittico is represented. In the church we can find an interesting tabernacle dating from 1500 with a curious symbolism, traces of medieval frescoes and numerous funerary slabs on the pavement which represents the influence of the church. Next to the church there is a small space called Parlamento Lodge  where the parliament was gathered for the public assemblies of the territory; on the wall of this space we can admire a great fresco which represents S. Antonio, S. Sebastiano and S. Rocco in remembrance of a plague epidemic in the village. The fresco is embellished by many medieval graffiti which evidence the past of Paggese. Among them there is the “magic square” with an arcane meaning. 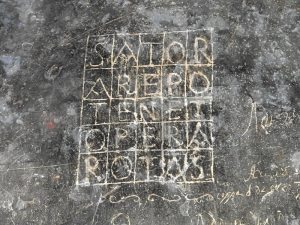 Paggese is a village in travertine stone thanks to the presence of numerous quarries in the surrounding landscape; the white building were built in the XVI century and they are characterized by the presence of the Latin inscriptions on the portals and on the frames of the windows. Among the characteristic buildings we can find the Turtle House, the Frumentario Mountain, Spalazzi House, the Tower House, Quaglia Palace. Each building is embellished by “ speaking coat of arms” of the noble and important families which lived here.

Let’s go to Castel di Luco, strolling along a path. The village is located on a travertine spur and it is one of the most interesting military buildings in the surrounding landscape: it has a spiral shape and it was built in the XV century. Its strategic position is linked to a control of the Salaria Road; around the castle there is the small village with simple buildings and a church.

The route ends in Valledacqua, not far from Castel di Luco. A path brings in a place surrounded by the silence and the meditation, ideal contest for the Benedictine Abbey of Valledacqua. The church is embellished by traces of frescoes from the XI to the XVI century; it’s a pleasure to visit this spiritual place, accompany with the prayers of monks. 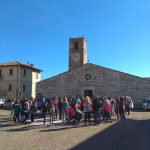 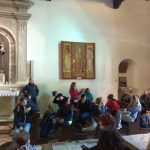