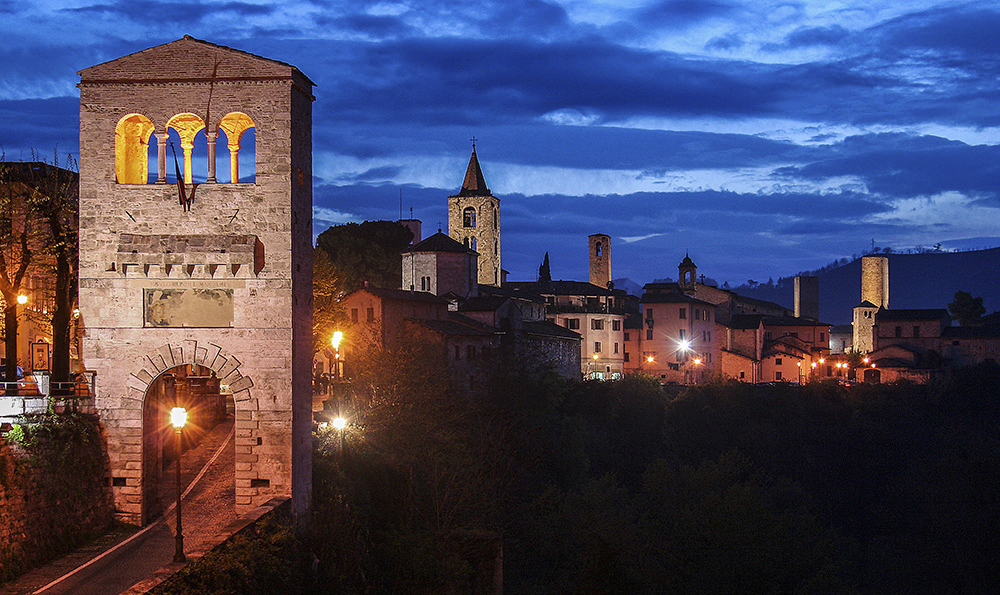 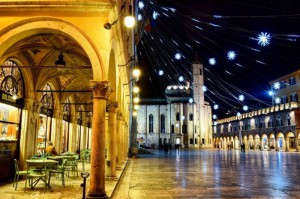 The route starts in Arringo Square, a medieval square where the joust of Quintana and the public assemblies were held here; it was the centre of the political and religious powers with the Arengo Palace, the Episcopate Building and the Cathedral dedicated to the Virgin Mary and S. Emidio, protector against the earthquakes. The route continues in the Baptistery of S. Johannes, one of the most interesting and beautiful examples

of the Romanesque architecture in the middle of Italy: it was built in the XII century..if you observe the rear part of the building you can discover a curiosity: underneath the medieval baptistery a most ancient building there was here.

the Baptistery and the Cathedral of Sscoli Piceno

We are visiting People Square, one of the most beautiful squares in Italy; it is considered similat to S. Marco Square, in Venice; in this space you can admire Meletti Cafè in Liberty style, People’s Captains Palace, the Merchant’s Lodge and the Church of S. Francis with its unique portal.

You can take a break in Caffè Meletti where you can taste the coffee corrected by anisetta, product of excellent of Ascoli Piceno

The route continues in the “Vegetables Square” where, still today, a curious market is held; not far from here you can admire Ventidio Basso Theater dedicated to the Ascolan commander of the Roman period: he established a friendship with the emperor Giulio Cesare. We are visiting the “Women Square” where an important market was held during the medieval period. In this part of the town you can admire medieval towers and residences, Romanesque churches and Rue..

From “Women Square” we can reach Stelle Street..this point of the town is one of the most suggestive point of the historical centre of Ascoli Piceno in the evening.. you can admire the Roman bridge: it was built by Emperor Augusto, it is one of the most largest Roman bridge in Europe. You can visit inside it! A memorable experience which become most evocative in the evening. Our time travel is finished and we can go back in Arringo Square.