The Romanesque treasures in travertine stone 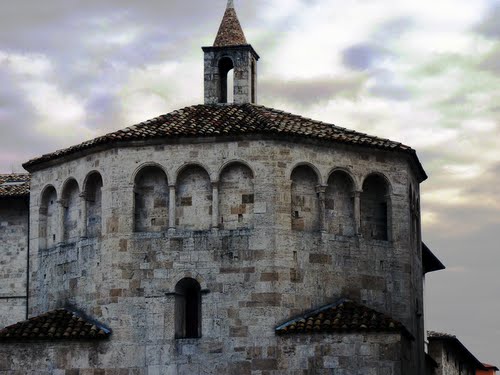 ACCESSIBILITY: some churches aren’t accessible for the presence of architectural barriers

The Romanesque churches are opened upon request. There are additional costs for the opening of the churches 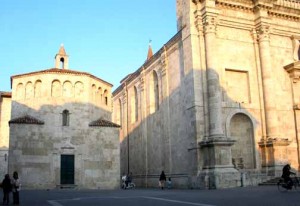 The Baptistery of S. Giovanni

The second stage is the crypt of the Church of S. Vittore, an unusual crypt used for peculiar activities; it was embellished with frescoes representing the Stories of S. Eustachio; they were realized by a famous artist in the first half of the XIV century.

Near to Arringo Square, in Tornasacco street, you can visit the Church of S. Gregorio. It shows two classical columns on the facade: the medieval church was an ancient pagan temple during the first century B.C and the first century A.C. In the church you can admire the traces of many frescoes and one of them represents an important event for the town of Ascoli Piceno.. 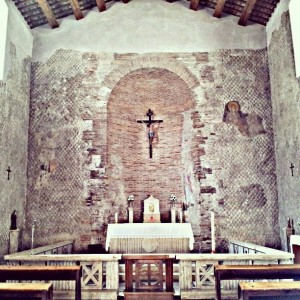 We are visiting the Church of S. Mary Intervineas; once the church was surrounded by vineyards; it is considered a church-fortress and its belfry is disconnected from it.On the belfry you can distinguish a little head. According to tradition it is the head of S. Bigna: legend or reality? In the church a miraculous fresco and an unusual funerary monument are conserved.

In Ventidio Basso Square there is the Church of SS. Vincenzo and Anastasio: the Ascolan citizens called this church “the chocolate church” because its facade is composed by panels with a particular use during the medieval period. The belfry of the church was a patrician tower; in the church you can admire an unique crypt: during the medieval period a miraculous water was here as tou can understand in the frescoes of the crypt. 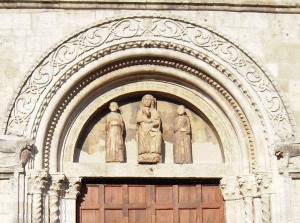 The Church of SS. Vincenzo and Anastasio, Ascoli Piceno

We are strolling along Soderini Street and we are arriving in the Church of S. James, the last stage of the Romanesque route. The church is located along S. James Street, a medieval street used for an important religious itinerary during the medieval period.