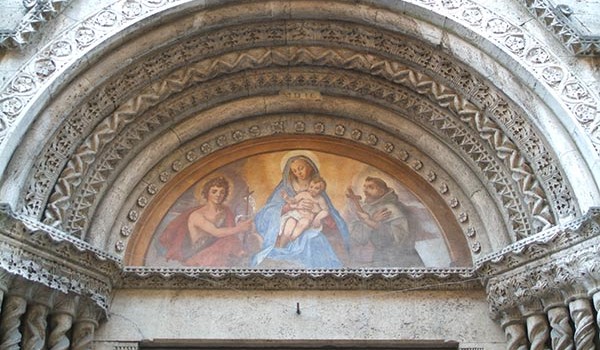 During the Medieval period Ascoli Piceo was an important Franciscan center: the first Franciscan Pope in the history was Gerolamo from Ascoli, Pope Niccolò IV…in this route you can discover the places of the town where S. Francis preached. After the exhibition “Francesco nell’arte: da Cimabue a Caravaggio” the itinerary continues in the town..

The route starts in the Church of S. Gregorio Magno, not far from Arringo Square. In this church you can admire a beautiful fresco which represents S. Francis in the act of preaching to the birds, the most ancient image of this event. This episode is linked to the presence of S. Francis in Ascoli Piceno… 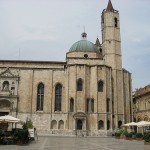 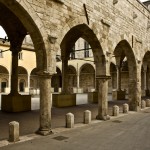 The cloister of the Church of S. Francesco 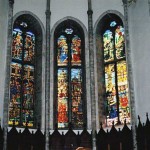 The interior of the Church of S. Francesco

We are reaching Solestà quarter where you can find one of a medieval gateways of the town; it was built in the XIII century and it presents the combined coat of arms of Ascoli and of Fermo, in remembrance of the peace of the XV century thanks to S. James from the Marca, a Franciscan monk. We are going to visit the Church of S.Mary in Solestà or “Cappuccini” dedicated to the Franciscan Order. S. Seraphino from Montegranaro was buried here and in the convent of the church you can visit the cell where the Saint lived. The ancient church of S.Mary in Solestà was destroyed and today only the grounds are conserved; the cloister of the covent is conserved: it was built during the XV century. In the Church of S. Seraphino from Montegranaro you can admire beautiful frescoes realized by the artist Mussini at the beginning of the XX century; he became a Franciscan mok and he represented the stories of the life of S. Seraphino with a Liberty and realistic style.