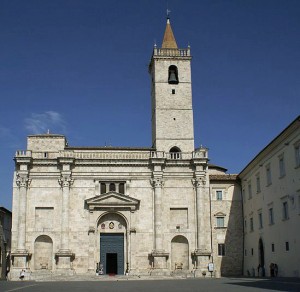 The route starts in Arringo Square: here we are seeing the Renaissance facade of the Cathedral designed by the artist Cola from Amatrice; in this square you can find the beautiful Roverella Palace, the Episcopate building, realized during the Renaissance period. In the Cathedral you can admire the polyptych of S. Emidio made by Carlo Crivelli in 1473. This painting is an interesting example of work of art of the early Renaissance.

In Viola Square we are seeing Bonaparte Palace (XVI century), a beautiful example of a Renaissance building in travertine stone; its facade shows elegant motifs and arcane emblems.

In People’s Square, a characteristic Renaissance square, you can admire People’s Captains Palace with its Renaissance facade, the portal of the Church dedicated to S. Francis with th figure of Pope Julius II, and the Merchants’ Lodge where the corporation of wool exhibited its products. 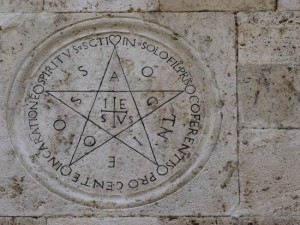 From the Church dedicated to S. Francis we are reaching the Mayor Cloister of the church where you can admire the Cola from Amatrice Room: today this space is used for conferences or exhibitions. This room is decorated by beautiful frescoes inspired by works of art made by Raffaello and Michelangelo in Rome.

The route finishes in Women Square or Ventidio Basso Square: from here, strolling in Soderini Street, you can see engraved inscriptions written in latin on the entrances of the Renaissance residences