In the ancient village of S. Benedetto del Trontoit’s possible to visit  the Sea Art Gallery in the beautiful Piacentini Palace. It was built in 1812 thanks to the noble Fiorani Family; then it was enlarged and enriched thanks to the same family as the symbol of its social development. In the Fiorani Family we can remember Beatrice Piacentini Fiorani (nickname Bice).She lived between Rome and S. Benedetto and she had a adventurolus life: she married her uncle and they had a son, Giuseppe, but he died soon. She also lost her husband, her parents and her brothers. She wrote her poems in local vernacular between the 1904 and the 1926; in 1905 she got an award in the Regional Exposition of Macerata. 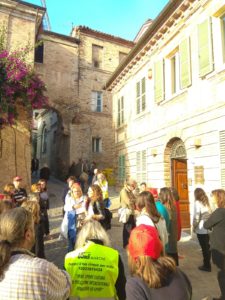 The Gallery is composed by a rich  artistic collection of paintings, pictures and drawings by the Swiss artist Alfred Chatelain and the great artist Adolfo De Carolis who represented the life and the marine landescapes in his paintings. Among the modern artists  we can find the local artists Armando Marchegiani and Angelo Landi. A precious opera is a collection of pictures of the artist Adolfo De Carolis: the pictures represent paranze,lancette (local boats), children and sailors.

In the basement of the palace an interesting tunnel is conserved. It’s dating from the Roman period. 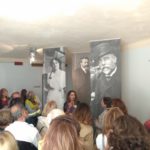 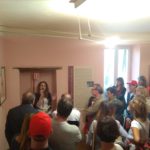