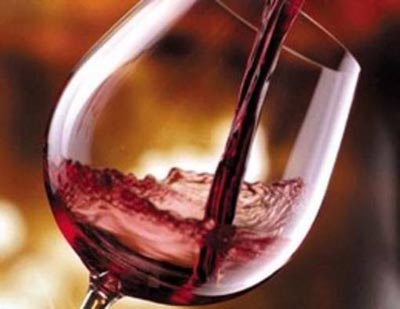 In this route you can visit medieval villages where you can taste the Rosso Piceno Superiore wine: Offida, Ripatransone, Acquaviva Picena, S. Benedetto del Tronto.

The route starts from Offida, one of the principal village where the Rosso Piceno Superiore is producted. Its name derives from an ancient divinity, Ophis; once Offida was an important spiritual center and still today in Offida important relics are conserved in many local churches..

Of great interest is the fortress: it was built by Pope Innocenzo VIII and it was designed by the Florentine Baccio Pontelli during the XV century. Nearby you can find the Civil Hospital made by the architect Pietro Maggi; it presents a neoclassical facade. We are seeing the monument dedicated to the Lacemakers which shows the typical artisan activity in Offida: the lace pillow. Strolling along the streets of the village you can find shops and workshops which show the objects realized by this ancient technique.

We are visiting the beautiful square with the Collegiate Church (XVIII century) dedicated to Madonna of Palio linked to a miracle, the town hall (XIII century), one of the most beautiful palaces in Marche Region and the Serpente Aureo Theater inaugurated in 1820. Of great interest is the Baroque Church of S. Agostino where the relics of the Eucharistic miracle of Lanciano are conserved.

The masterpiece of the medieval architecture is the beautiful church of S. Maria della Rocca, a Benedictine spiritual center. It is full of frescoes of the XV century realized by the Master from Offida. In the crypt of the church you can admire some frescoes and two chapels dedicated to S. Lucy and S. Katherine from Alessandria. In the superior church, with a unique nave, you can find traces of frescoes with the Stories of S. Benedict and curious inscriptions leaved by pilgrims. These inscriptions tell important historical events in Offida such as documents. 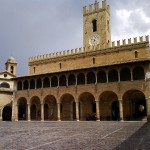 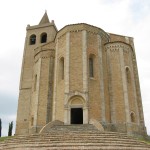 The Church of S. Mary of the Fortress, Offida 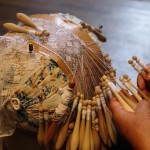 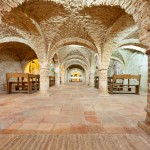 The crypt of S. Mary of the Fortress, Offida.

In Ripatransone you can find numerous churches: the most important of them is the Church of S. Gregorio and 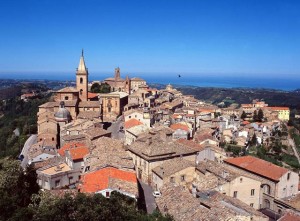 Ripatransone, the “Overlook of the Piceno territory”

Margherita (XVI-XVII century). In this village you can see beautiful buildings such as Massi-Mauri Palace with a particular aspect and an elegant balcony in wrought iron (XVIII century), the Podestà Palace (1307), the Town Hall (XIII century) and two theaters: the Luigi Mercantini Theater and “The Fonti” complex where an ample outdoor space has been set up for concerts. In Ripatransone you can pass through in the narrowest lane in Italy (43 centimeters) 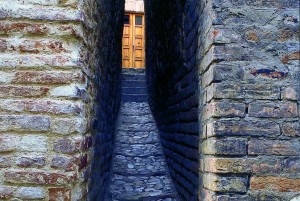 The narrowest alley in Italy, Ripatransone.

In Acquaviva Picena you can visit the Fortress: it was built by the Acquaviva’s familyin 1300; here you can admire a beautiful view: sea, hills and Gran Sasso Mountains. In this Fortress you can visit two museums: the Museum of Antique Arms and the Pagliarole Museum where you can see the traditional straw baskets that were once produced by the peasant families. Still today in Acquaviva, in August, take place a commemoration which re-evoking a marriage..Sponsalia.. 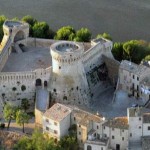 The last stage of the route is San Benedetto del Tronto; it is a modern town whose development and economic growth are related to its position on the coast, both as a seaside resort for holidaymakers and for its fishing resources. The harbour and the fishing boats are ranked among the most important in Italy.

S. Benedetto del Tronto was founded by Liburni population and during the medieval period the Church of S. Benedict was built. Along the coast you can find villas in Liberty style and Palazzina Azzurra, an exhibition area located among pine-trees and gardens. The old medieval part is not large in size and it surrounds the Tower of Gualtieri (XIV century). You can find numerous churches such as the Cathedral of S. Mary of Marina (the church is dedicated to the Virgin Mary, protector of S. Benedetto del Tronto): on the last Sunday in July a religious parade leaves from the Cathedral and heads towards the harbour continuing on board the boats which are adorned with flowers and garlands. Of great interest is the Museum dedicated to Bice Piacentini, a poet in S. Benedetto del Tronto: in this museum you can see works of art with maritime subjects, some of them realized by great artists such as Adolfo De Carolis, the French painter Chatelain, Landi and Marchegiani. 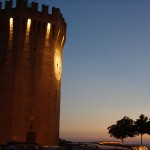 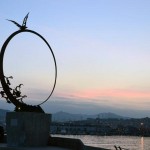 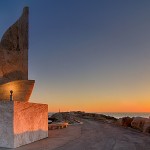