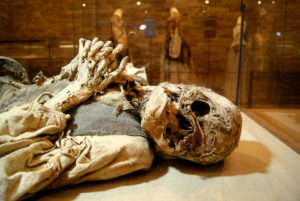 The route is dedicated to discover the medieval village of Monsampolo del Tronto and its hidden treasures: the Mummies Museum and the underground routes.

The tour starts in Marconi Square with the visit of the Franciscan convent and its beautiful cloister: it is composed by an elegant well in travertine stone and a refectory with suggestive frescoes. The route continues with the visit of the Church of Maria SS. Assunta dating from the XVI century with some parts in the Baroque style; next to the church there is the beautiful Crypt’s Museum where a lot of mummies were discovered here: the crypt was a cemetery.  In the museum we can find many mummies and the mummies’ objects, such as gowns and suits, the most interesting elements of the exhibition dating from the XVI and XIX centuries.

We’ll stroll through the medieval village of Monsampolo and we’ll reach the underground routes: they were underground galleries for depositing sustenance and escapes. The underground route is about 120 meters and it is enriched by a permanent Nativity Scenes exhibition; they were realized by the local artist Luigi Girolami.

We’ll reach the most highest point of the village. It is called Terra Vecchia  (or Castle Square): here you can see elegant buildings of the Ascolan noble families, Guiderocchi Palace and Malaspina Palace. You can see the main tower dating from the XIV century, the most ancient tower of the place. 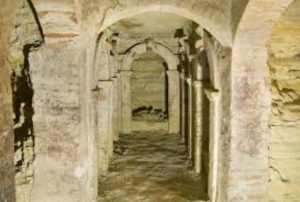 We’ll stroll along the streets of the village with beautiful medieval buildings made of bricks, among them the Death Arch and the ancient towers.